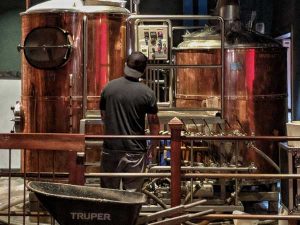 As both a pub-style restaurant and a micro brewery for the greater North Central Massachusetts region, the Gardner Ale House is a unique experience. In fact, we’re proud to say we’re the only full-menu brewpub in both North Central Massachusetts and Worcester County, featuring bistro style food such as chicken fingers and brick-oven pizza, with a thin and crisp crust from house-made dough. It’s all fresh, never frozen or bought pre-prepped and it’s all served in an upscale setting.

But never mind all that. Right now, we’re here to talk about beer. Moon Hill Brewing Co., to be exact, because, as you probably know, Moon Hill is the Ale House’s own in-house brewery. As such, we offer:

If you’re not familiar with our brewery and our beer – which, first of all, is hard to believe – let’s take a short jaunt through just some of our popular styles to give you some idea of the delightful taste adventure you can embark on once you set foot through our door.

Of course, we’ve got IPAs, with so many intriguing flavor profiles that we’re confident you’ll have trouble picking a favorite. So don’t. We highly recommend drinking ALL of them – just not all at once.

For example, there’s our oldest IPA (since 2006!)  Facelift IPA – a  house favorite at our brewery and the Gardner Ale House. It’s loaded with English hops, using a traditional British IPA recipe. This is the old man of the group, not to be confused with our hoppier, juicier, spunkier IPA’s. There’s also our Pufnstuf American IPA, a product of the new breed of IPA’s and the one we also distribute outside our pub in cans and at draft.. It’s a not too hazy IPA with a citrusy hop flavor in the New England tradition

Looking for something darker? Try our Thunder Buddy Cascadian dark ale, double dry-hopped recipe with Citra and Equanot hops for pleasant citrus undertones. There’s also our Snack Pack stout, a slightly sweet stout with hints of chocolate and caramel. The roasted malt keeps it clean and provides a dry finish.

That’s just a hint of what our brewery is putting out.  We brew sours, barrel aged beers, Belgians; the list goes on.. We encourage you to stop in for a pint of something interesting and some of our fresh chicken fingers, pizza, or anything off our pub-style lunch or dinner menu offerings. It’ll be life-changing.